Dark Descents: Staircases and the Supernatural

Yesterday, upon the stair,

I met a man who wasn’t there

He wasn’t there again today

– From “Antigonish” by Hughes Mearns

The dark steps that lead into the bowels of a catacomb. The splintery wooden flights that disappear into the depths of a shadowy attic. The sound of a creaking step echoing in an abandoned home.

These are all staples of terrifying stories, from horror movies to tales told around a flickering campfire. If you think about it, a staircase is no more than a stack of steps. So what is it about both natural and architectural staircases that inspire us to include them in our nightmarish imaginings?

Some of the most iconic scenes in the history of horror films have involved staircases. The possessed Regan from 1973’s “The Exorcist” spider-walked from her room and down the stairs. Norman Bates, under a dissociative fugue and dressed as his mother, murders a hapless detective on the staircase of the infamous Bate’s house in 1960’s “Psycho.”

Perhaps the earliest example is from the 1920 German expressionist nightmare “Nosferatu.” In the scene, the sinister shadow of the monstrous Count Orlok silently slithers up some steps.

A Hollywood producer said that staircases are scary because people do not know what waits at their end. In movies, it’s easy to create this uncertainty by draping one end of the stair in shadow.

Staircases and the Spectral 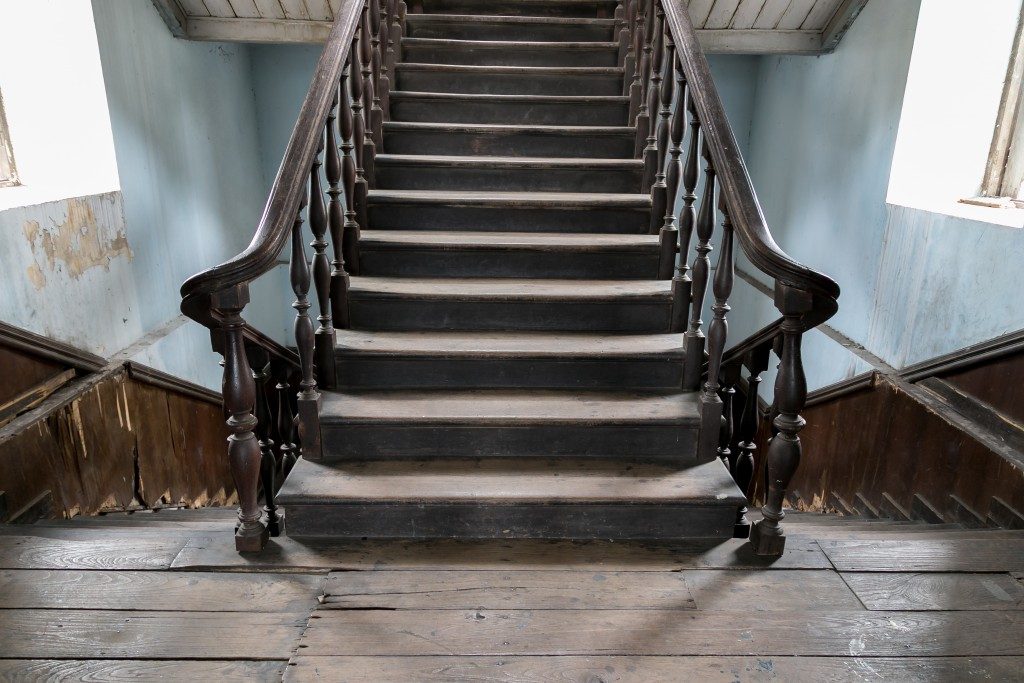 Believers of the supernatural have used ghost photographs as proof of the existence of spirits and other such phenomenon. Photographers took two of the most famous ghost images on staircases. These are the infamous photographs of the Brown Lady of Raynham Hall and the ghost on the Tulip Staircase.

The Brown Lady of Raynham Hall is supposed to be Lady Dorothy Walpole, the lady of the house in life. For years after her death, multiple witnesses claimed that she was haunting her former home, often wearing a brown dress she favoured in life, hence the name. It wasn’t until a photographer for Country Life magazine took a shot of the hall’s staircase in 1936 did some form of evidence about these claims appeared. The photo shows a shrouded figure descending the steps of the house.

The Tulip Staircase is a spiral staircase at the Queen’s House section of the National Maritime Museum in Greenwich, London. A visiting clergyman took a snapshot of it in 1966 and the photo revealed a cloaked entity climbing the stair, holding the banister with both hands. The spirit in the photo is impossible to identify because of its lack of features and the house’s 400-year history.

Neither of these images have been disproven or explained away in the decades following their development.

Staircases and their Symbolism

The primary use of staircases is to reach levels lower or higher than the one you’re currently on. Because of this ancient civilizations viewed staircases as ways to access the afterlife. This is most obvious with staircases on pyramids, such as the ones built by the Mayans, the Aztecs and the Egyptians. They viewed stairs as metaphorical bridges between the earth of mortals and the sky of the gods.

Going up staircases implies enlightenment, the sky and paradise. But what about going the other way? Most crypts and tombs are below ground, the connection between death, decay and descent would not have been lost to our ancestors.

Perhaps the souls of the lost gather on staircases in hopes of climbing into some benevolent afterlife. The next time you are on a staircase, be mindful. You never know who, or what, is using it with you. And if there is something on the staircase, did they come down or . . . climb?